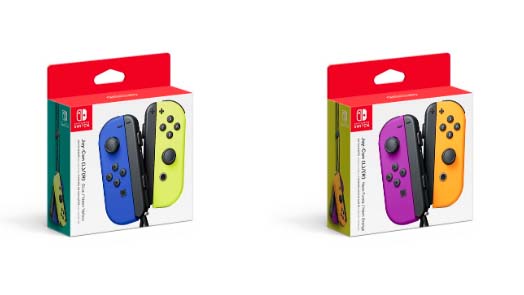 It’s turning into a big year of Nintendo hardware. Two years after the Nintendo Switch first released, we now know we’re getting a handheld-only Switch Lite console, a renewed Switch model with double the battery life – and now even some new Joy-Con controller colors, for more aesthetic improvements.

Nintendo of America announced the new Joy-Cons on Twitter, with Blue/Neon Yellow and Neon Purple/Neon Orange options. They’ll cost $79.99 (about £65, AU$115), the same as previous Joy-Con colors, and will be available from October 4, 2019.

You can already get Joy-Cons in yellow, but the blue coloring is one we haven’t seen before – and commentators on Twitter were quick to point out comparisons to paint-bucket shooter Splatoon‘s bright color scheme.

Sure, you’re not getting any technical improvements here, and it’s a bit depressing not to see any price reduction on hardware that’s a couple of years old now. There are also a lot of reports coming in about controller ‘drift’, with the Joy-Cons tracking the camera angle slowly off in a random direction despite the thumbstick not being used.

But if you’re looking for some jazzy new colors to give your current Switch – or battery-enhanced model – a makeover, it’s nice to have some options. (Don’t forget, though, you can sidestep all these small Joy-Cons with a premium Nintendo Switch Pro controller.)

The Democratic Republic of Congo has authorised the startup of an experimental nuclear reactor that has been mothballed for more than a quarter of a century. Please follow and like us:

In its most direct foray yet into the $3.8 trillion medical sector, Amazon has launched a pilot program to administer health care services to many of its nearly 54,000 Seattle-area employees and their families. Please follow and like us: